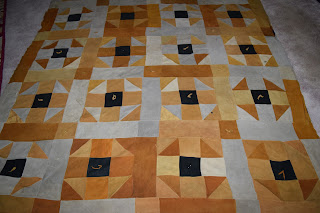 Once upon a time, in the high mountains of Colorado, where the wind blew cold and the snow piled deep, lived a mountain man.  He grew his own food, raised his own animals and chickens for meat and wool and leather and eggs, and hunted and fished and gardened and preserved much of everything else he and his family consumed.  This tough, brawny, stocky man almost never went to the store...it was a rare day when anything he ate did not come from the work of his own hand.  He was never in a restaurant, ever, to the knowledge of anyone who knew him.

The deer and elk that he hunted, (and used every tiny bit, from antler to meat to hooves to bone...no trophy hunter here), had beautiful hides, that he patiently cured by hand.  Later, he had a town person do this for him.  He never wasted, anything, ever.  Leather jackets were sewn, leather gloves; moccasins.

Surprisingly, he was also a quilter.  He made the above quilt, on a little black featherweight sewing machine, sewing through thick layers of leather, to make the above quilt.  This quilt weighs 24 pounds, on my home scale. It is tied with leather ties, through the center of each block, and is backed with purple satin, and of where this came from is a mystery to this day.  It was a heavy, sturdy item, meant for cold nights in a little house with no heat, except from a tiny potbellied stove in the front room.

I have that little black sewing machine.

Have you guessed it?


This man was my father.  Born in 1919, he was a true mountain fellow, living outdoors and doing things that were even then considered to be of an earlier era.  He was a world war 2 vet, fighting for our country, too.


I guess I did not know this quilt existed.  My brother had it, and he lives in Australia.   He recently told me about it, and so this quilt has been from Colorado to Australia, and now to Texas, where I live now.  It now belongs to me, as I am the family quilter.


It is so heavy as to be uncomfortable to lie under, but in the snowy nights below zero, I imagine it felt very good!  It was made in the 1950's, and has no label.  I am making one to put on it, so everyone knows about where this particular quilt came from, and who made it.


So I guess I came by my quilting love naturally!  My mom made dozens of scrap quilts, and now I know my daddy made at least this one, too.  I sure miss them...I was born when they were in their late 40's, and was raised in exactly the same environment as I described above.  More like I was born in the 1800's instead of the 1970's, and I believe it was fairly unique for the time.


I grew up tough and strong, and worked hard every day with my parents.  It was a great childhood, in retrospect.  I never knew how poor we really were, but I am so fortunate to have lived this life, up in my beloved Rockies.


And in other news! 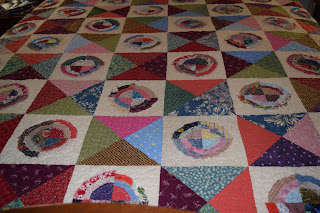 This is what is on my bed!  What is on yours?????  This is a very worn bullseye quilt...raw edge machine applique.  Scrappy!! 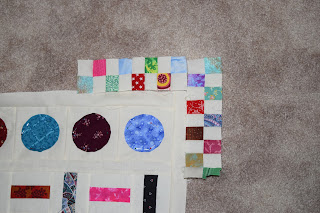 I am working on the border for the row by row quilt.  Lots of tiny one inch finished squares to sew together!!!  And super fun!!!


Have a wonderful day...what is your quilt story?  Would love to hear about your heritage!!

What an unusual and special treasure your dad's quilt is! And so is the story! I'm so glad you will be the keeper of the treasure! The second quilt is really special too. My dad was a gardener and raised chickens, had a milk cow, (Mother made butter), and sometimes a pig he slaughtered. We always ate very well from what he provided. Few people today have any idea how great those days were! --- "Love"

Fascinating, Julie! No wonder you know how to work so hard and get so much done! And what a quilting heritage you have. Thank you for sharing this with us. I have always had great respect for you, but it has just deepened considerably!

I loved reading your history Julie. I didn't discover quilting until I was in my forties although stitching in some form was always part of my life. My grandmother and her twin sister came from Belgium to England just after the First World War and worked at Harrods in London hand stitching silk lingerie. They were both prolific knitters and my first material stash came from them. She had five boys so when my mother came on the scene she was able to pass her skills on. My mother stitched many clothes for the family as well as knitting. I hand stitched my entire wedding outfit and now I quilt every single day and I love it. You give me lots of inspiration too - thanks for a lovely blog. Brendie xx

What an amazing story. Would love to know the story of how your parents met. Sounds like you could write a book about them and their life together - or maybe an album quilt with blocks telling their story.

Oh my what a wonderful, fascinating story. I'd love to see more pictures of your Dad's quilt...close up and the purple backing :) Amazing you didn't know about it before and how generous of your brother to gift it to you. Your upbringing illustrates there are different ways of being rich....living a rich, full life by you own hand might be difficult and hard but very rewarding too?

At first, I thought this man was one of your patients that you cared for. How amazing to find out it was your father. A truly amazing man and story! What a treasure you now have.

You are a natural storyteller. I was completely captivated by your post this morning. Thanks you for sharing this. He did an excellent job on his first try. A leather quilt!! It must be one of the rarest thing on Earth.
Beautiful quilt you have on your bed. Love it. What's on my bed? Shame on me, it's a store bought quilt, hahaha! I still have to make a quilt for myself. Have a wonderful weekend. ;^)

Amazing story! Be sure to make a label where you can put that story on there.

Wow. What a beautiful story. Hugs

What a wonderful quilting story! I do not have a quilt heritage that I am aware of. I started one myself!

Where in TX are you?

Julie, what an amazing story and heritage you have! I hope you'll post a few more photos of this wonderful quilt, including its purple satin backing. Has your quilt and its story been added to the state's quilt registry?
Sadly there is no quilting heritage in my family that I'm aware of. My maternal grandmother, a Polish immigrant, sewed many of her children's clothing on an old Singer treadle machine, using floUr, sugar and other feedsacks. My grandparents were truck farmers, raising hundreds of chickens for eggs and meat, as well as row crops that they would take to an open air market in the city twice a week. My other grandma was nearly blind, so made her living baking bread and taking in laundry to support herself and her six children after my grandfather died in his early forties. My mom only mended clothes with her sewing machine but did enjoy embroidery and crewel work. So a long way of saying I am the beginning of this family's quilting heritage.

What an amazing story. I've been reading your blog for a while now and I would have never guessed at your background. Thanks so much for sharing a part of your family history. I made
a quilt similar to the one on your bed. I think that I donated it. I made a quilt using the depression block pattern for my bed. Again, thanks for sharing.

Thank you for sharing your father’s story! What an amazing man he was and a quilter too!!!!

A precious thing, to have quilts that both your parents made, so glad your brother gave it to you. Certainly very few parts of Australia you would need a super heavy quilt like that, unless you were camped outside!

What a wonderful family story. My daddy is the one who taught me how to use a sewing machine. His mother sewed on a treadle all her life, and he was proud of the clothes that she made. He also loved his grandmothers quilts (I have one of them). How special for you to have a family machine. Treasure those quilts.

Love the story behind the quilt, the sewing machine, and your father's lifestyle.

I grew up with heavy quilts on my bed and actually prefer sleeping under heavy covers. They are comforting to me.

What an incredible story. I'm so glad you shared it with us. Where in the mountains did you grow up? I'm glad you have your father's treasure.

Thank you for sharing the story about your father and his unusual quilt. What special memories! Glad your brother shared the quilt with you.

What a cool story - and an amazing heirloom that you have!!

I enjoyed your story very much - especially how you ended up with the quilt, but how did it get to Australia??? I printed up my Mother's GFG quilt. and the story, made 1936-7 while Mom was awaiting birth of first child, using scraps from nearby relative's kids. I ended up with the damaged remains, yes, because I am the quilter, and put it back together again, making it lovely. Ya can't tell the difference between the old and the new unless you are a quilter! I basted the label to the quilt, a whole page of history. I use the quilt occasionally, but mostly, it is folded neatly on a nearby chair, so I always can see it. Elaine Adair

What a wonderful and rich heritage you have! And a truly unique one of a kind quilt to remember your Dad.
There is no quilting history in my family. Not one scrap!

I loved this story! I, too, was born in the 70's to older parents (my dad was 52, mom 37). My dad was born in 1921, and was a recycler before recycling was "in." He could fix anything, or at least rig it to work, and I find myself getting more and more like him as I get older. My thoughts always go along the lines of, "How can I make this work? I think I just need a rubber band...." I think that's why I am drawn to scrap quilting. It makes me feel good to use others' throw-aways, making something beautiful out of them. I love your blog, your stories, pictures, and encouragement!

Love, love, love your true story and love that you have that little sewing machine.

What a treasure of a quilt as well as a treasure of family history! It sounds as if you come from good, hearty, hard working folks and I'm betting the apple didn't fall far from the tree!

Thank you for sharing this amazing and wonderful story!!

I love how ever once in a while you come out with some crazy life story! What a gift to be raised in this fashion. Of course, we were outdoorsy and poor but I didn't realize it at the time. Wouldn't change it for anything~!
What an amazing quilt!!! 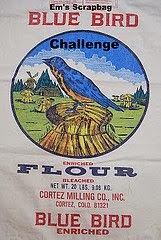 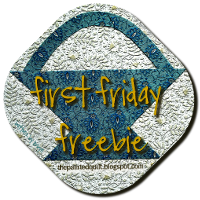 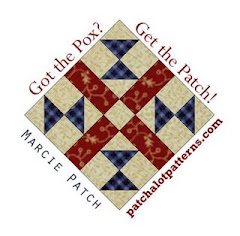 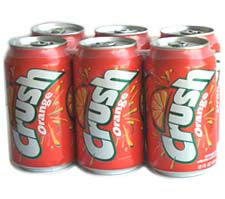